Melbourne's proud history with iced treats dates back to the late 1800s, when the Melbourne Ice Manufacturers company in South Melbourne launched Sennitt's Ice Creams. It was no small matter at the time to possess the technology to create, rather than simply import (at huge expense), huge chunks of natural ice for cooling, let alone freezing on a mass scale.

For decades, the logo of a polar bear licking a cone graced cinemas and was one of the city's most iconic illuminated signs, flickering over the South Melbourne factory until Unilever took over and retired the brand in the 1960s.

By then, retail competition was fierce, with Streets and Peters battling it out for beach day dominance. The Italian migrant population had also introduced gelato stores. But I wonder if this was anything compared to the cold war that has descended on Melbourne in recent years.

Pidapipo opened in 2014 and Il Melograno and Spring Street Grocer arrived with their high fashion fitouts and proper Italian chilled posetti canisters. The race to win hearts was on.

It was a glorious time. We came to understand how gelato was different to ice-cream (a lower fat, more warmly churned, Italian-born iced treat that should be eaten fresh off the machine or not at all). It was also a time when the barbs flew thick and fast.

Every newcomer I interviewed at the time was quick to make the distinction between their made-from-scratch product and the frosty fluorescent peaks we were familiar with, likely kept from crystallising thanks to stabilisers and high sugar content. "You won't find any artificial ingredients or pre-made flavour bases here," was the repetitive, urgent cry.

And it was true. Melbourne quickly and excellently became overwhelmed by all-natural, hand-crafted creative frozen goods. Whatever your kink, from spicy ice-cream to vegan sundaes served in kitschy surrounds, you are now covered.

So much so, that as we enter 2021, doing things the right way is old news. This is the year where sustainability and personality come to the fore. That and the fact many of these innovative newcomers are home delivery only. You cannot get more here and now than that.

Ice-cream meets Filipino flavours and fine-dining technique. If you ever wondered what became of former Lume chef John Rivera when he departed last January, he had plans to open his own restaurant. But after joining forces with fellow fine-dining chef Minh Duong (ex-Maha), the duo have struck a chord with sorbet and gelato and their bold reimagining of entire Filipino desserts inspired by the ice-cream carts that roam the streets of Manilla.

You'll see young coconut sorbet and jasmine gel finished with preserved tropical fruit. Or a hark back to the flavours of that typical Filipino breakfast of chocolate porridge and salted fish, here translated as chocolate gelato and glutinous rice with salted fish sauce caramel.

Rivera and Duong's chef-eyed view of gelato as an entire balanced dessert means that in 2021 the duo is looking to stock their product interstate, open a shop and build namesake carts for weddings, parties, anything in need of a scoop.

Where: Online only via karitonsorbetes.com

Gelato was the balm for all of us in 2020. But particularly so for Gaby Tedja and Rico Adhitya, who work full time in HR and finance respectively, and started making gelato to beat the burn of lockdown. A hobby became an obsession, with a serious following for their online-only, high-quality and small-batch product.

They're using Gippsland Jersey milk and fresh fruit and making their own pastes from scratch, releasing two flavours every fortnight, which the couple are keeping fairly traditional. Hazelnut has yielded to summery mango sorbets but there are a few outlier flavours to hit the fad buttons, including tiramisu, raspberry and mint sorbet, and coffee pecan.

Next? They plan to keep things online in 2021, but are adding choc tops and ice-cream sandwiches to the range.

Best seller: Biscoff has been by far the most popular flavour.

House pick: For Gaby, it's classic pistachio, and for Rico, amarena cherry (which will come in one of the 2021 flavour launches).

Where: Online only via gelatte.com.au Pidapipo is launching a gelato lab with its own rooftop orchard and hives. Photo: Supplied If you want to take the temperature of Melbourne's gelato scene, you could look to Lisa Valmorbida's ever-growing Pidapipo empire. Valmorbida was on the crest of the all-natural, artisanal gelato wave when she opened her Carlton store in 2014, and in 2021 she is raising the bar with Pidapipo Laboratorio in Brunswick Street, Fitzroy.

The space will become an innovative HQ for the business, where they will begin manufacturing and using their own chocolate, growing their own produce on the roof and collaborating with chefs and suppliers, aiming to make the best farm-to-cone gelato in the game. Valmorbida expects the space to open in March.

Freakiest flavour (from store to open in March): Avocado and lime. "People get weirded out by avocado in a sweet context but it works really well because it gives a great texture and the lime lifts it," Valmorbida says.

Where: Stores in Carlton, Windsor and Melbourne, pidapipo.com Chef Adam D'Sylva is busy. Coda Lorne has opened; he is fronting Lollo, the restaurant of the new W Melbourne Hotel (opening February 4), and he is getting into the gelato gambit with sweet star Monika Frkovic, a former Tonka and Coda chef with Gelato Papa and Piccolina pedigree.

Starting with two pop-up carts at Pepe's Italian restaurant in the CBD and La Manna supermarket in Essendon, by mid-February they'll be slinging soft-serves, choc tops and gelato tilting to D'Sylva's Indian-Italian roots and Frkovic's Croatian background from a permanent home in a former Ivanhoe bookshop.

Freakiest flavour: "Bubble gum gelato is fobbed off, but it's something I grew up loving, so we have tested a from-scratch bubble gum gelato and it has come up a treat. Other than that we have added fresh Tassie wasabi to some white chocolate sorbet," Frkovic says. Wild stuff.

Best seller: Frkovic predicts the almond gelato with almond praline. "It's so delicious and understated."

Staff pick: Ricotta gelato, with lemon zest to brighten it up. "Sometimes I like to spike it with some booze." You might have come to know of Nabil Ansari, sous chef at hatted restaurant Sunda, for his contemporary Indian duck samosas and lamb biryanis last year, but his personal obsession and legacy is likely to be his ice-cream, sold online through the Hotel Windsor gift shop.

Ansari's Gelato transforms some of his favourite flavours from his Indian upbringing into frozen desserts. The heavily spiced chai flavour is based on the way his father liked the drink, different for every household. "He doesn't like milk, and instead goes heavy on ginger, adding cardamom, star anise and cloves with just a dash of dairy for creaminess," Ansari says.

The mango with fried bread and coriander owes its creation to his refusal as a child to eat bruised fruit. "My mum didn't want to waste the mangoes, so she would puree them with sour cream, chill the mixture and serve it with hollow fried bread."

Freakiest flavour: Guava, lime and kashmiri chilli sorbet. "No one is adding this amount of chilli to their sorbet," Nabil says.

Staff pick: Spiced chai. "It would be too creamy for my father but I love it."

Where: Online only via giftshop.thehotelwindsor.com.au. Sandra Foti (pictured right) has come a long way since opening her Hawthorn store in 2015. This summer alone, she has launched two new CBD shops (Degraves Street and Hardware Lane) plus a luxe new Swan Street store with a fitout by Hecker Guthrie. But it's still a family-owned team sweating the details, even as they ratchet up. They sandwich their peanut butter gelato between dulce de leche chocolate biscuits and even make their own Ice Magic.

But if a truly life-changing scoop of pistachio gelato is all you need, you'll be hard-pressed to find a better version of the great gelati leveller. They've done collaborations with the new-look Longrain, under Scott Pickett, and more major chef collaborations are on the cards, while at the Swan Street store, Foti is joining forces with Four Pillars Distillery to create a gin-joint-gelateria mash-up to pummel every dopamine button you have.

Freakiest flavour: "For us it is special enough to be about classic flavours and sourcing high-quality ingredients. We focus on what goes into the incredible gelato that we create, rather than how it is decorated," Foti says.

Staff pick: "Still the pistachio. Top it with panna (whipped cream) and our warm, in-house Better than Nutella sauce if you want to indulge." 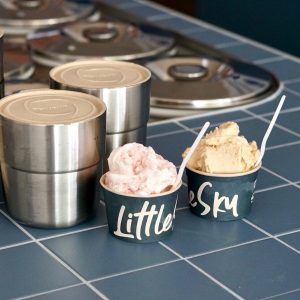 Opening a small-batch, eco-friendly Brighton gelateria was a life's dream realised for Max Shatkhin (minus the pandemic that struck as soon as he launched last January). Having sold his family machinery business and passed his gelati exams in Costigliole d'Asti in Piedmont, Shatkhin found a patch of Brighton he thought was in need of some non-artificial love. And there's a lot to love.

Everything is made from scratch including waffle cones, and it's collab city. Dromana's JimmyRum spikes a boozy scoop, their caramel calls for Caramelicious, a small-batch Melbourne product following the traditional French method of slow simmering caramel in copper cauldrons. The local angle is writ right across the walls in a mural by local artist Sarah Darby, plus they are sustainable to the core, dehydrating fruit scraps out the back and using metal Returnr containers (pictured) to avoid polystyrene.

Best-seller: "We don't actually have a stand-out but up there is our iced coffee. We use Omar and the Marvellous Coffee Bird coffee which, combined with Schulz Organic Milk and Gippsland Jersey Cream is really, really good," Shatkhin says.

Freakiest flavour: They introduce a one-off flavour every Friday to keep things interesting and Shatkhin says it will take years before they run out of ideas. "The Halloween spookilicious had activated coconut charcoal and got blacker as it got colder," he says.

Staff pick: "They are always asking me to bring back the rhubarb crumble with custard and vanilla."